Roses of Redoubt By Elizabeth Doak

A community based project that creates a portrait of an area of Eastbourne, East Sussex using photography and roses. This idea arose from the overt divisiveness and anger that a typical society in the UK seems to be suffering from since Brexit and all its complicated factions, that can now include issues of ‘race’ and ‘pandemic’. Things that have been bubbling under the surface for decades, even centuries have broken that surface and grown ugly. Roses are symbolic of much in the history books and therefore are not completely innocent of metaphor, but always seen as something beautiful despite their sharp thorns, I am using these flowers to create a portrait that negates the political, racial, and privilege divide of the people in the one mile radius that I have chosen to harvest the roses from. I hope to invite people to be part of something that on the surface avoids all these things if only for a brief moment.
Of course this project is exactly about land, politics, race, privilege and ownership at its core, but I have chosen these roses to bring a community together as a symbol of commonness through their exquisite beauty.

The Process and Outcome

I collect the roses by cold calling, knocking on doors of a house where I see a rose growing in the front garden and then explaining who I am and what I am doing. Very rarely have I been refused a rose by the owner. In fact more often I am kept chatting on the doorstep or invited through to the back garden to see more specimens for choice. I have met many interesting and incredible people whose stories of their roses will be recorded too. Each rose will hold the name of the giver which will traditionally designate a gender which will be a visible division, but as a female artist, I have a liking that by chance most of the roses have been given by the women on their doorstep. A stronghold of Roses of Redoubt .
The roses that I collect are scanned to create the image – I chose this medium as it refers to a kind of documentation, a census through typology that levels everything. The scans also create a ‘same size’ image of the subject. Something that traditional photography rarely does. I scan in the dark or at night using the absence of light to create a black background. The scans are traditional looking in that they look familiar and follow a known aesthetic, but often (not all) they are manually deconstructed and then reconstructed, interchanging leaves and heads with other roses, forming new hybrid of relationships.
I hope to bring together all 169 rose ‘portraits’ received from 169 individual households as A4 life size prints in an exhibition later this year and also in a book format at some point in the future. I also wish to invite all the participants for tea and cake in a local community hall to create a network of new neighbourly relationships through this project.

Between 1817-24 Pierre-Joseph Redoute a Belgian artist, botanist and pioneer of botanical illustration, created his now famous paintings of roses as three volumes of ‘stipple’ engravings finished in watercolour called ‘Les Roses’, through the patronage of Empress Josephine, wife of Napoleon Bonaparte. All of the roses depicted came from her estate, Château de Malmaison near Paris. This format of a rose on a blank background and labelled is my visual inspiration. The books are rare and not many original copies exist in the UK. One such copy exists however at Chatsworth the great estate in Derbyshire and the seat of the Duke of Devonshire. As the number of images present in these volumes are recorded as ranging from 168 to 182, I have chosen to represent 169 images of roses to match the content of the version that resides at Chatsworth because The Duke of Devonshire is also the owner by covenant since 1834 of the land that all the Roses of Redoubt grow on. This area of Eastbourne called Redoubt is close to the seafront and is so named because of the fortress built in 1805 to defend our shores and nation from a possible invasion by Napoleon.
The name of Pierre-Joseph Redoute and the English spelling Redoubt have the same meaning – formidable or stronghold – as in fortress. Words that for some are still pertinent as an allegory for England. At the time of the Brexit vote in 2016 one of the prevailing themes was immigration, some, feeling a fear of invasion onto the south coast via France of ‘others’ and voicing a defence of an English culture sometimes imagined. (Both Josephine and Napoleon were not French by birth but immigrants from distant french colonies). This part of the coastline has always had a very intimate relationship with France historically whether from wars and invasions as enemies or allies, the influence of language and place names, or through the corruption of religion and power in the middle ages. Latterly twinning towns especially between England and France were created as a symbol of togetherness in peace across a divide physically and psychologically after the two World Wars. Directly across the channel from Eastbourne on the opposite coast sits a town called Veules Les Roses. I was hoping to visit here in May for their rose festival and to collect roses here too In an attempt to keep a reference to this French connection within the project. Not being able to go this year, I have created an online community with this town a Rose Twinning page on Facebook called Mon Amie La Rose. People from either side of the coast can post pictures of their roses to be admired and ‘liked’ by those in the group, making a new dialogue in times of Covid 19. Apart but together.

Throughout all of this, roses are the common thread, loved globally because it grows happily, creating pleasure on land around the world. All land should be full of hope and glory and the rose is never uniquely English.
As the artist, I have control over this project, but it has not been undertaken to make judgments on any individuals perceptions, feelings or point of view but to try and create a unity though other ideas and concepts and by questioning my own position within this local community. 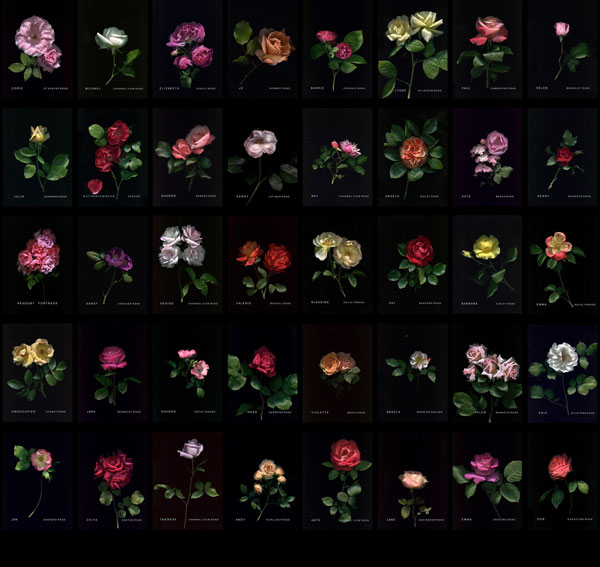 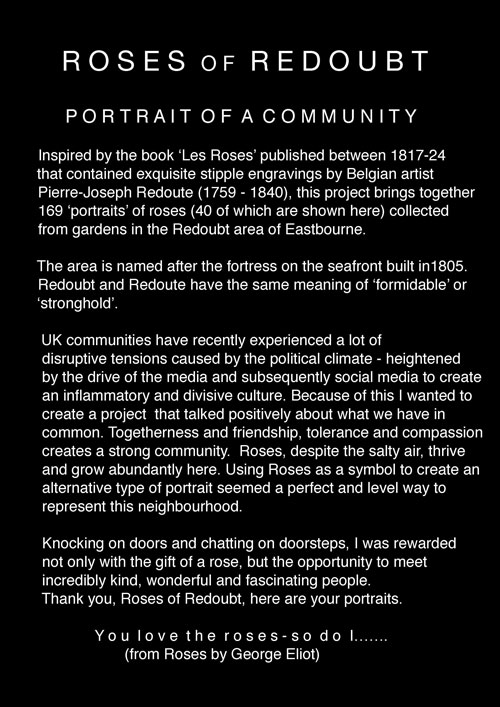 For the ELSTOAF live broadcast on 28th Dec you can watch an interview with Elizabeth made walking around the Redoubt area of Eastbourne.